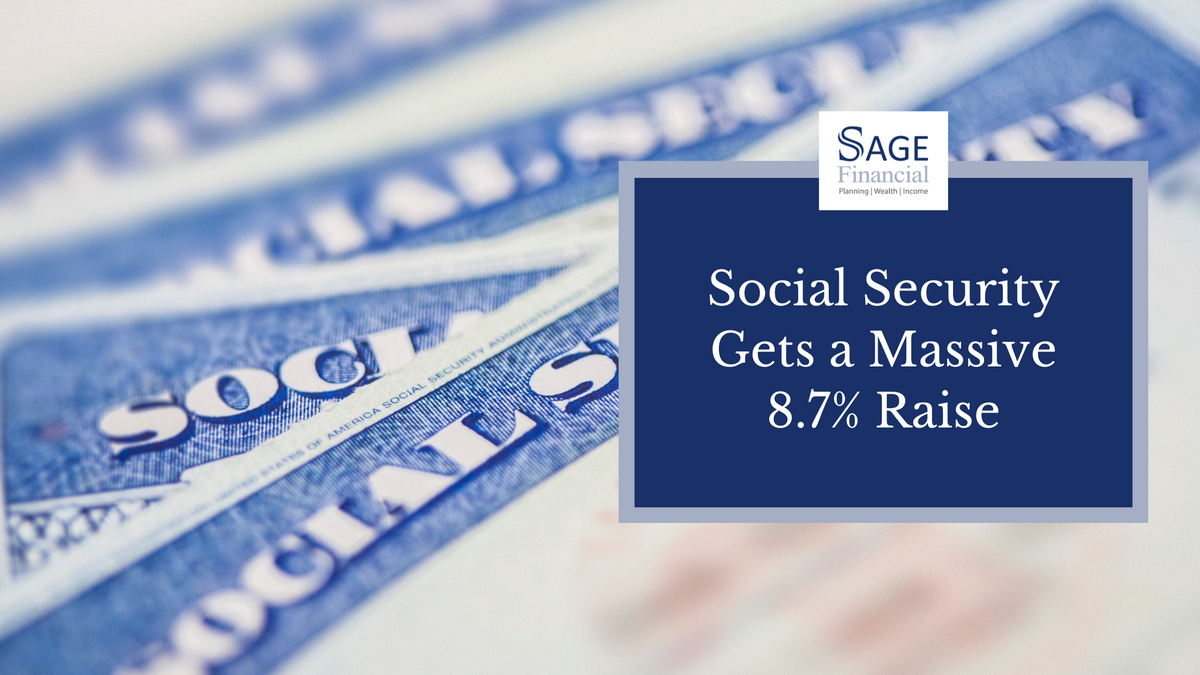 Social Security Gets a Massive 8.7% Raise

Social security is way behind inflation so you may need a better retirement plan.

The adjustment will increase monthly Social Security checks by about $145 per month on average, according to AARP, which represents seniors.

The maximum amount of earnings subject to the Social Security tax (taxable maximum) will increase to $160,200.

There is no limit on earnings for workers who are "full" retirement age or older for the entire year.”

The short answer is: it depends on your perspective.

On the positive hand:

On the Other Hand

According to the 2022 Social Security Loss of Buying Power Study released by the Senior Citizens League, Social Security benefits have lost 40% of buying power since 2000.

Specifically, it found that senior living costs have increased 130% over the past 22 years, yet benefits have only gone up by 64%.

The Study further documents that the reasons for the loss of purchasing power are mainly due to rapidly rising housing and medical costs, especially heating and Medicare Part B premiums. From the Study:

“High inflation over the past year has deeply weakened the buying power of Social Security benefits, particularly for those who have been retired for more than two decades. The buying power of benefits of those who retired before the year 2000 has eroded by 40 percent — the deepest loss in buying power since the beginning of this study by The Senior Citizens League in 2010.

Rapidly rising prices since March 2021 led to an erosion of 10 percentage points in buying power when compared with March data in 2022. While almost every expenditure category increased, this year’s erosion in buying power was most felt in energy costs for heating and gasoline, higher prices for many food items, and the steep jump in Medicare Part B premiums in 2022.“

“Actual price increases vary but consider the following example and its impact on the finances of older homeowners: Home heating oil increased by 348 percent from 2000 to 2022, by far the most ever recorded in this study. In 2000, the average annual cost of homeowners’ heating oil was $1.15 a gallon and it cost about $575 to fill a 500 - gallon tank, roughly enough for a typical winter heating season. In 2000 the average benefit was $816 per month and one month’s benefits could pay the entire winter’s oil bill while still leaving some money for groceries and medications. On the other hand, by March 2022, home heating oil climbed to $5.13 a gallon, costing $2,565 to fill up the same 500 - gallon tank. By 2022 COLAs only increased benefits to $1,336.90 per month, and it would take two months of Social Security checks before the season’s oil bill is paid in full.”

When to File for Social Security

Social Security benefits constitute a big part of many retirement plans. Advice abounds about how and when you need to file. What is best for you and your family?

Generally, you can file for your Social Security retirement benefits when you reach age 62. But doing so will reduce your benefits by as much as 30% below what you might receive if you wait until your full retirement age. Accordingly, most financial advisors recommend you delay filing to better maximize your lifetime benefits.

If you wait until your full retirement age – which is 66 for most people – you will get your full benefit. Or you can wait until age 70, which will increase your benefit because you earned what is called “delayed retirement benefits.”

In other words, there is no one-size-fits all answer to when you should start receiving Social Security.

Social Security is Only Part of Retirement

It is important to remember that although Social Security plays a very important role in supplementing one’s retirement income, it was never meant to be the only source of income.

In fact, even the Social Security Administration states that Social Security benefits will – at best – cover about 40% of the typical worker’s pre-retirement income. But the key word is “typical” because everyone is different.

And to make matters more dire, those contemplating retirement – which is everyone – should know that Social Security has a funding issue: by the year 2034, the Social Security trust fund will be at $0 and will only collect enough taxes to pay about 79% of scheduled benefits. In other words, your retirement might be somewhat dependent on Congress stepping in to fix this shortfall.

Call your financial professional to help you manage your retirement plan so that it strives to not be dependent on Congress taking action.

Content in this material is for educational and general information only and not intended to provide specific advice or recommendations for any individual.

Inflation is the rate at which the general level of prices for goods and services is rising, and, subsequently, purchasing power is falling.

All information is believed to be from reliable sources; however LPL Financial makes no representation as to its completeness or accuracy.

This article was prepared by RSW Publishing.